l / 2016
Everyone survived the snowzilla has dumped 2 l /2 feet of snow and then drifted into major snow piles!! All the horses got dug out to play and ice their legs at the same time. After swearing never to have a face book page I have given in ..... come visit!! 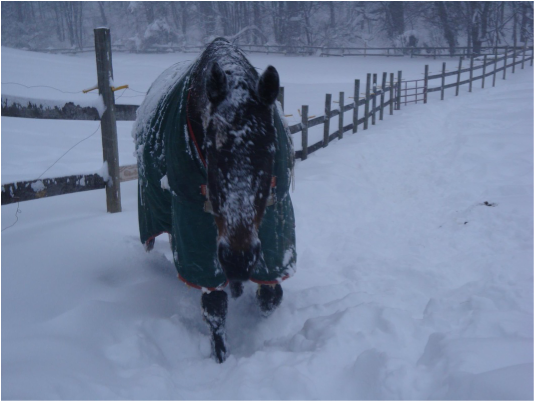 6/7 /15 Cope Ian's Prayer went to the Waredaca starter and showed he thinks BN is for babies
(which now that he is 4 he says he is not!). He easily negotiated the stadium with one minor green moment and ate up x-c. I also rode Old Fashioned (Thomas) and Fire Falls (Finn) in the Elementary division. They both proved that eventing is a game they want to play and do well at. All 3 went back Tuesday for the schooling day and jumped bigger and better things. I am looking forward to these 3 shining brightly this season.

5/4/15 Cope Ian's Prayer (Opie) is really getting to love his excursions. Today was his 2nd show, a hunter show at Lehigh Riding Club. The jump course was beautifully laid out with all the jumps having fillers of flowers, brick and stone walls. Opie warmed up in a 2 ft class, giving me 2 lovely lead changes and got a 4th place. Then we stepped up to 2'6. He was forward, soft, landing on the correct lead every time and won his class. Second show, second blue ....... I think this boy is going places!

5/16/15 Copelan's Prayer went to his first big boy (real) x-c school today. An easy trek down to Woodstock Park to school on their beautiful variety of jumps. The place was a zoo with people galloping and jumping everywhere, but "Opie" just took it all in like the seasoned pro he is. He has been to one event after all! All our slow work has really paid off. He never needed a lead anywhere. Thought the banks and ditches were pony play and only briefly hesitated at the water. He now thinks he is ready for Rolex, I think he is ready for BN....

5/2/15
First event of the season for me and my ponies! I rode Cope Ian's Prayer at the Iron Bridge PC HT. His very first show of any kind and he was a star!! Not quite confident, but very obedient and held it all together. Dressage score of 31.1. Other than wanting to sight-see on x-c, he was on his game. He did think the first pinto he saw was worth a second look!!